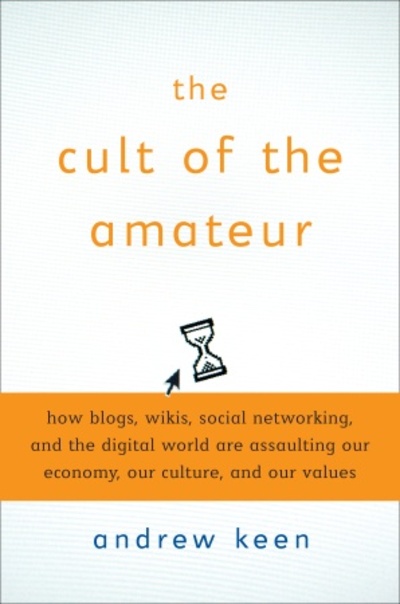 *I found the piece that I wrote years ago. Some of the examples I listed out regarding the algorithms might not be so proper as now it looks, for they’ve greatly evolved, but I guess the core idea I want to express still remains the same: in the world of Internet, we are too self-focused (YES, it even gets reinforced with the help of social network tools！Ironic, right?), and we need some DISTURBANCES.

Media and celebrities are usually full of power on establishing viewpoints. However the Internet decentralizes the traditional influence network. It has set up an open platform of public speaking with audience guaranteed—though the depth of engagement is yet to be decided and hard to predict.

Andrew Keen thought web 2.0 was a “grand utopian movement”. I agree. With user generated contents flooded in, I even think the revolution is conducted much quicker than he imagined: netizens have already realized that so high is the time cost they paid on discriminating all sorts of information flow in the Internet that they have to seek for shortcuts to the real treasure.

So far, there are two common approaches applicable: call for authorities (human), and call for automatic recommendations (machine).

In the digital world, thanks to a less strict supervisory and censoring system, netizens have a higher chance to be exposed by diversified information and perspectives. Therefore, we in fact command much more initiative of value judgment than most of them have realized.  But what we could and what we did are two separated things: sometimes, even knowing getting the upper hand, we still feel not used to or not capable of judging properly on our own. Thus, a lot of people remain following the traditional thinking mode—turn to the authorities for help, just like how they turn to mainstream media in the offline world.

It’s just the word AUTHORITY has been redefined in the world of Internet: no longer limited to media and so called EXPERT, but also could be any individual or organization which has a strong appealing power and has been popularly selected. With the education level rising, people’s attitude changes from taking in whatever media said, to subscribing only to the view they feel they approve of. Nonetheless, it’s more likely that they will still incline to the loudest voice.

And the loudest voices, by and large, represent the strongest attitude or the biggest financial support. Hence, in many cases, commercial interest is involved, on which Mr. Keen has sharply criticized. I’d rather hold my opinion here as this is an argument requires deep study before a conclusion could be reached. But frankly speaking, although commercialization will push the development of cultural industry, in my opinion it will also devastate those unsung culture forms which are valuable but not very profitable—although, it’s not Internet’s fault, just like you cannot blame your fat on stores that sell chocolates. It’s a problem of regulating and controlling.

What makes things even more worrying is the mediocracy of popular discourse. As always one tends to enjoy those pieces provided by a person who is similar to him in terms of opinions or aesthetic taste. Consequently, supposing there is no particular promotion or limitation (luckily, there is), the online platform would be subordinated to the sake of average people, the majority, and follow the quasi-egalitarian ideology, which is dismissed by Mr. Keen who suspects it would lead to the collapse of REAL authority: the intellectual community.

Whatever social impact this new type of mass collaboration brings about, people are unconsciously categorizing themselves by different tastes/interests, and predictably, if nothing new emerged to build bridges, and we let it run its course, isolated cultural islands will begin to take shape, which might result in lack of cross-culture exchange and integration, especially between mass and elite.

Traditional media sells everything in an intact package to its consumer. But if we take newspaper for example, probably, a few subscribers in fact only require a few brief news titles. They don’t actually intend to read a particular special column, an in-depth report or a commentary. They read them just because these articles are already there, and they have paid for them. This kind of “compulsory” reading encourages collision of views, which is not a bad thing in consideration of diversification, because supposing the readers can choose, they might want to just cut down some components from the package and reduce their cost.

In this respect, the Internet, on the other hand, is just acting in the opposite way of traditional media: it disassembles all the contents and provides netizens with thousands hundreds of choices for free. Yet even within an “authoritative” site, netizens are unable to deal with the overloading information all by themselves, which then leads to the success of content aggregators:

If the content is ranked according to site users’ common interest, such as the pattern of Digg, then the consequence follows the same logic of my debate on popularly elected authority as above;

Otherwise, like what Pandora could achieve*, the enormous database collects personal histories provided by the users, identifies their characteristics and preferences, and then makes recommendation accordingly. Nevertheless, if a hip-hop fan always concentrates on the same genre, he would never learn the beauty of classical music. That is to say, the immanent mechanism deprives netizens of the opportunities to get inspired by dissents or innovations.

The existing content aggregators are tailed to meet the user’s demands of now, and screen out those “disturbances”. Therefore, either way, users are kept away from quite a few beneficial contents that they’ve never approached before and their like-minded companions have never taped into, either. Even when it comes to services like Google Reader Explore, whose core algorithm integrates the two major sources altogether, they are capable of helping netizen obtain in-depth knowledge concerning the areas that arouse one’s interests, but still, they blow the chances of broadening one’s mind within the many remaining areas of the landscape.

In the future, providing information in the Internet won’t make much money, while filtering information will. By that means the new patterns of information spreading should generate great impact, for better or worse, upon people’s cognitive processes. Hence, online service providers, the regulators and netizens are all confronted with two inevitable puzzles: if the egalitarianism side of peer production necessarily stands opposite to sharp minds and deep thoughts; and, if the highly commercialized Internet will evolve to be an obstacle of culture communication.

Regardless of whether to counter or cater, it is a must happening progress.

2 thoughts on “Reading Notes of the Cult of the Amateur”